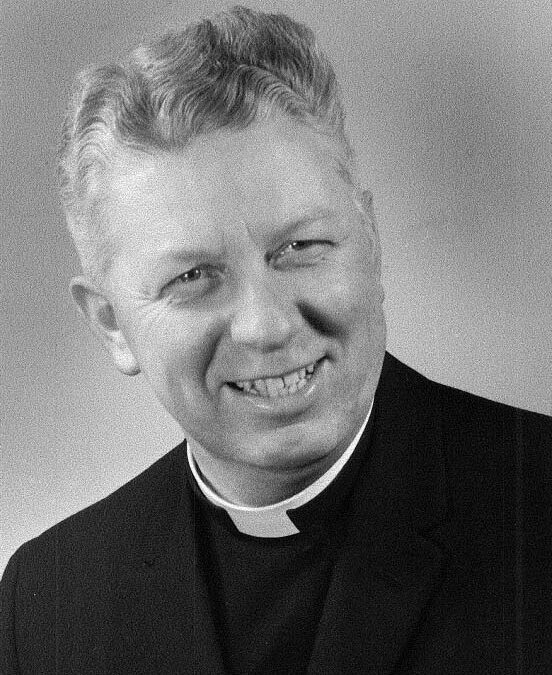 Just like the stories of the early Christians in the Book of Acts, Grace was a hive of activity.

A mission developer, Rev. Roy Grosz, would become Grace’s first Pastor (see photograph above).  Mission development was thriving in North America.  One of the nine Lutheran church bodies, the United Lutheran Church in America, was organizing mission congregations at a rate of one per week during 1952 and 1953.  Grace Evangelical Lutheran Church (Oakville) was part of that group, being formally organized on November 29, 1953.

New church groups were being formed.  On May 1,1954, confirmation classes met at St. John’s United Church.  On May 2, a new membership class was organized in the Masonic Hall.  On May 3, the ladies of Grace met at the home of a member, Mrs. Campbell, to form a ladies group.  On May 4, the Luther League was formed at the home of Mr. Ross Golem. All this in less than one week!

In the annual report for 1954, many firsts were reported.  Membership had grown to 112 people. The Sunday School had expanded to 84 teachers and students. A Vacation Bible School was held. Luther League, lead by Robert Plume, had 16 meetings since it was formed in May 1954. On average, 79 people were attending worship.  Pastor Grosz made 550 visits.

The construction of a parsonage had begun, including a parsonage room for congregational meetings.  A building fund was started to build a church building.

Even in the challenges and expenses of its early days, benevolence was important – over $ 1000 was donated for such causes as hurricane relief.

God was truly blessing this ministry!