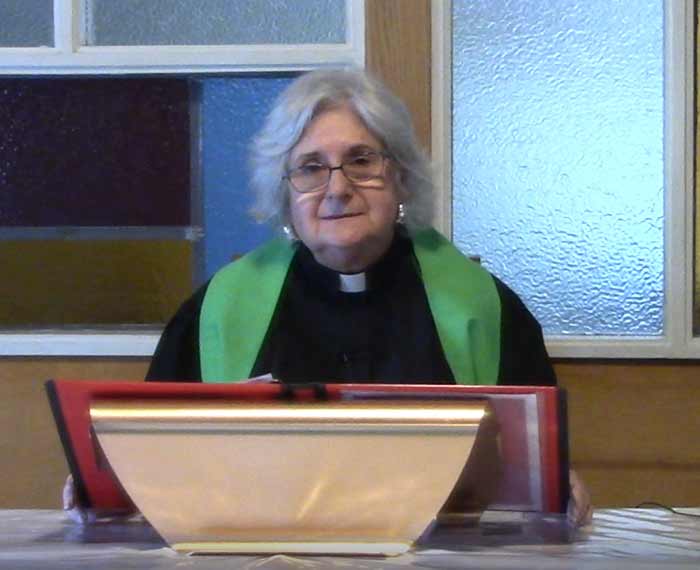 We welcome Pastor Marni Nancekivell who lead us in worship on October 31.

Grace be to you and peace from the One who was and is and is to come. Amen.

There’s a story about a man who would wake up early to pray before the sun arose. Because he prayed for so long, his cat would eventually get restless and start bothering him while he was praying. He tried to get the cat to leave him alone during prayer, but nothing worked. So finally, one day, he decided to tie the cat to the bedpost while he prayed. That solved the problem. He continued this tradition every morning of the rest of his life, tying the cat to the bedpost each day and then praying undisturbed. Even after he had children, he continued the tradition of tying the cat up to the bedpost during prayer.

When the man passed away, his daughter decided she should do the same thing. Every morning before sunrise, she would tie up the cat and then take some time to pray. Although she only prayed for a few minutes because her life was busier, she still tied up the cat. After all, this was her way of honoring her father.

When she died, her son continued to tie up the cat in the morning, in spite of the fact that he had long since given up praying in the morning. He continued the tradition even though it had no meaning or purpose for him.

Today is Reformation Sunday, which commemorates the day that Martin Luther nailed his 95 Theses to the door of the church at Wittenberg. He posted them on the day before All Saints Day, when many people would be attending mass, so his 95 Theses would be seen by many people. When Luther posted those 95 statements about the church, he did not intend to start a new church. He wasn’t trying to create the Protestant Reformation. He wasn’t trying to create a new denomination. He merely wanted to call attention to teachings of the church that he believed to be non-scriptural and incorrect. But his action caused a sweeping change in the religious world that went far beyond the creation of the Lutheran church. More reformers came along after him who saw different errors of the church, and they felt free to stand against those errors because Luther had come before them.

Today is Reformation Sunday, and we are commemorating an event that happened in 1517. It would be easy to point to that date as the true time of the Reformation, to reference that moment five hundred and four years ago that changed church history forever. But if all we do is look back at an event five hundred years ago, we are no better than the grandson who ties up the cat during what is no longer his prayer time because tradition said he was supposed to. As heirs of Luther’s tradition of Reformation, we can say that we as a church are “always reformed and always reforming.” We can’t ignore history, but if we don’t have our eyes on what’s ahead, we will miss the reformation that is still to come. We should be “always reformed and always reforming.”

There is so much to be appreciated in this church, the Evangelical Lutheran Church in Canada. Lutheran theology really addresses the complexities of life. The way Lutherans have served and taught and spread the good news for hundreds of years in this country inspires me. The way that we address important issues through social statements and intentional conversations really works for me. But a dear friend of mine,Pastor Carla Thompon Powell who is a Lutheran pastor in Chicago writes: I struggle with some of the places where we as a wider church, and frequently we within local congregations, have been too rigid.

She continues :We, as a denomination, have clung to musical styles and liturgical forms that don’t make sense to most people.

Where else in society do you encounter music that is 500 years old being played on an instrument that was popularized even more than 500 years ago? Maybe a few orchestra halls, but few other places. We as a church have argued over who gets to be included in the church and who doesn’t, while the unchurched world around us dies for lack of spiritual, and even physical, food. We have majored in the minors, spending much time on things that are minimal in their impact, arguing over which color hymnal we will use or whether to use the contemporary or traditional Lord’s prayer. If we are a church reformed and reforming, we have to get real and look at where we need to be, how we need to change, and what we is going to need to transform for us to get there. End of quote.

DC Talk, a Christian hip-hop group, put out a CD in 1995 with this quote on it: “The greatest single cause of atheism in the world today is Christians who acknowledge Jesus with their lips then walk out the door and deny him by their lifestyle. That is what an unbelieving world simply finds unbelievable.” Let me read that again. (re-read) We need a reformation in the way we live out our faith so that our words can be lived in our lifestyle, because we are a church always reformed and always reforming. If we cling so closely to tradition that we cannot see the world in need at our very doorstep, then we will find ourselves all alone in this big church, not just here in this sanctuary but in every sanctuary. If avoiding institutional death and ministering to the people in the church club are our primary goals, we will be like that grandson who tied up the cat every morning, but didn’t really understand why.

When we look at the story of Martin Luther, we see a man who was not bound by tradition. The historic church teachings weren’t doing it for him. Not because he was just contrary, but because he knew too many men and women whose consciences were being burdened by the Catholic theological system of good works for salvation and the sale of indulgences as a way of buying forgiveness. Luther himself found no soothing gospel words when he came to confession. When he came to confession, he found himself still focused on his sins. So he went against the religious teachings of the church of his time, and he violated the policies of the only religious system he knew, forging a new path of religious understanding. He did it because when he read scripture, he found grace and mercy and God’s goodness. When he read scripture, he found that all had sinned and fallen short. When he read scripture, he found that God loved the world so much that he gave his only begotten Son for us. When he read scripture, he was reminded that we are saved by grace through faith, not by works. Martin Luther did not follow the status quo. He challenged, questioned, disobeyed, and transgressed the church system of his day. He was a true reformer, and put us on the path to being a church that is “always reformed and always reforming.”