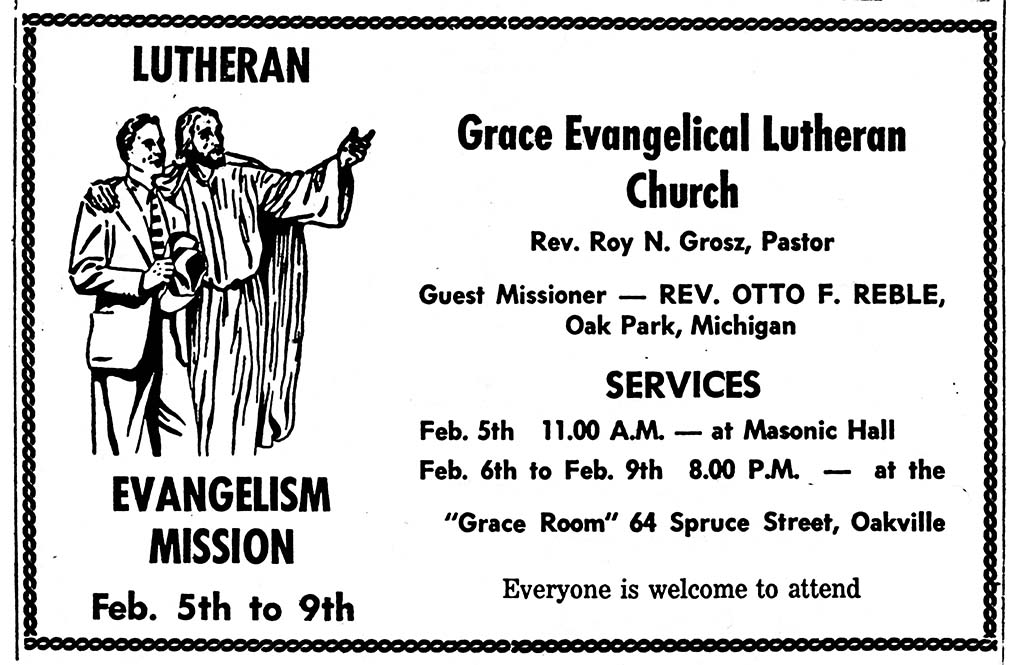 Three locations appear prominently during the early days of Grace prior to the construction of our church building.  One was the Masonic Hall on Church and Thomas Street where Sunday worship was conducted.  Another was St. John’s United Church where confirmation classes were held.  And the third is the mysterious “Grace Room”.

So, what do we know about the Grace Room?  It was located at 64 Spruce Street, Oakville.  This is mysterious because there is no municipal address today identified as 64 Spruce Street.  Did Oakville renumber homes on Spruce Street?  Is this the location of our current parsonage?  We don’t know – perhaps a reader of this blog can tell us.

What we do know is that the Grace Room was added to the parsonage in 1955. It was a large assembly room that could accommodate 75 people.  Members donated 150 hours of labour, materials and $ 300 (5% of the church budget) to construct it.  Gus Dreger and Gordon Scott organized the work.

The Grace Room was dedicated by Rev. Albert Jacobi, the President of the Evangelical Lutheran Synod of Canada. It was used for mid-week worship services, organizational meetings, and other small gatherings.

It was the site of many events.  In the early days of Grace, the public was invited to mission meetings at the Grace Room (See the preceding advertisement).  It was the site of adult membership classes; the women’s group met there; the Luther League met there; and the Sunday School Teacher’s Council met there.

There was even a wedding in the Grace Room.  Sheila Banger and Volmer Buch were the first people to exchange wedding vows there.  Sheila came from Dundee, Scotland and Volmer was a service station operator in Clarkson.

Like the early Christian church, the members of Grace were not constrained to one location and used the resources they had to spread the Gospel.